We at Agape Naturals are strong supporters of 4-H! We’re proud to sponsor several Arapahoe County 4-Hers with SweetPro feed supplements. Read Evin’s updates here on using SweetPro Fresh Start with his hog.

April 30, 2016: I finally got my market hog April 9. She is a Hampshire cross, and when I got her she weighed 98 lb. It took me a couple days to pick a name for her–I needed a name that would kind of fit her personality, and I finally decided on the name Lola. Lola is an all black pig with two white front socks. She has a very calm laid back type of personality. Her first experience with snow was on my farm. She was a little puzzled by the white mass on the ground: She slowly approached it and took a small bite and then fell in love it. Lola and I have been taking 15 minute walks every afternoon learning how to drive with the stick. We have been walking farther and farther each night. Now that she is comfortable with her surroundings and her trust for me has grown she is willing to go anywhere I’m willing to take her. One of the challenges I’ve been having with her is when she decides she wants to go somewhere else than where I’m taking her she will stop and try to turn around and leave, I keep treats on me, and I reward her for her good behavior, and she is quickly growing out of this fit of hers. Once we are done working I usually give her a belly rub and tell her goodnight. This month has been a fun adventure, and I’m looking forward to next month and the challenges it brings.

May 31, 2016: This month I got Lola pretty well trained using the pig whip, she responds well when I tap it on her and usually she moves in the right direction. I continue to reward her good behavior with treats. I got her weighed this month, and she now weighs 180 pounds. I was satisfied with how much she has gained but now there is a concern that she could be overweight by fair time. So I talked with some friends who are having the same issue, and they told me to start limiting her feed and add soaked beet pulp and rolled oats to her diet that will help to fill her up and have her grow at a steady pace that I can maintain her rate of growth so she will be at a good weight by fair time. I’m getting her weighed again in a week to see how the feed is working. I have been studying a lot in my pig book on hog diseases and hog industry issues that will help me in showmanship. My goal is to get grand champion in showmanship like I did last year, but with the competition ever growing I need to be on my A-game so I’ve been working diligently on becoming better and hopefully it will pay off at fair. This month has been a success, and I can’t wait to see what’s in store for next month!

June 30, 2016: This month has been going pretty well for Lola and me. We have been working hard on polishing off the rough edges in showmanship and have been taking long walks to help build her stamina for the long shows at fair. I weighed Lola 2 weeks ago, and she weighed 131 lb Lola has been gaining an average of 1.9 lb a day. I’ve had to limit her feed even more now so she won’t be overweight by fair time. This month I have been stocking up on show supplies like shampoo, show conditioner, and just yesterday I bought a new pair of show boots. Fair is coming up, which is making me nervous, but I feel like with all the preparations I’ve done I am ready to take on fair! Thank you so much for sponsoring me, I appreciate it! 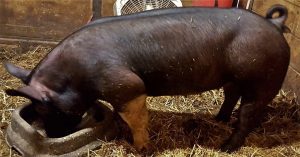 September 3, 2016: Fair went pretty well this year. Lola weighed 284.lb at fair only 6 pounds under the maximum weight, so we did really well in weight. She placed 1st in her market class. We didn’t place in showmanship because she got stressed out and glued herself to the fence, and the showmanship class started at 11:30 at night. So we were both tired and stressed out. What I would have done differently is I would have taken her to more shows so she wouldn’t get stressed out as much at fair. I sold her at the auction for $1,025 and with cost throughout the year I made about a $500 profit, so I did well. I’m using the money I made to fix my truck. I’ve learned some valuable lessons that I can use to my advantage in future years. Just wanted to say thank you again for supporting me this year–it means a lot!