We at Agape Distributors, LLC, are strong supporters of 4-H. In fact, we were 4-Hers ourselves! In February 2014 we selected several Adams County 4-Hers to receive SweetPro feed supplements and report back on their results with it! Read Megan’s updates on her horse here.

April 10, 2014: This week Danson and I are prepping for our first show of the season. I plan on doing western pleasure, trail, showmanship, and horsemanship with him. We have been practicing every day all week. The arenas at the fairgrounds just got new sand, and Danson for some reason does not like to back in the deep sand. So I hope he does well at the show. But he has been doing great with patterns. His hooves and coat look really well since he has been on SweetPro! 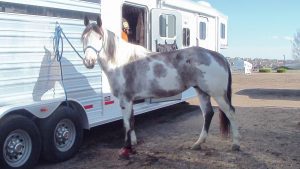 May 27, 2014: Some fun things I have done with my horse so far was go on some trail rides. I enjoy them and so does Danson. We have been showing a lot lately, and some classes I have done really well in are Western pleasure, trail, showmanship, and English pleasure. Danson (Dan) was very energetic and antsy yesterday because we hadn’t ridden him for a week. He had gotten new shoes so we gave him a break. I rode bareback today, and he did really well. We went over some poles to practice trail. Dan has really slicked off nicely and looks great!

June 12, 2014: My project has been a huge success so far! I have done not only 4-H shows but APHA and open shows with my paint gelding, Danson. I am looking forward to fair! Danson’s coat looks amazing and has shed out very nicely! He is healthy and his hooves have little to no cracks in them. I have done some trail rides with him, and he has done great! I mainly show Dan in showmanship, halter, Western pleasure, trail, and horsemanship. I also do hunter under saddle and hunt seat equitation. Our most recent success is 3 circuit awards at a horse show in Moab, Utah. Danson is the best horse ever!

June 23, 2014: This month I have been working very hard with Danson. We have gone a step up from 4-H shows and have gone to an APHA/AQHA/open show in Moab, Utah, and an APHA/AQHA show in Loveland. At the Moab show I got three circuit awards. Danson and I have a horse show on June 29, next weekend. I showed our other horse Nickel at a ranch horse show yesterday and got high point in novice and a buckle! Danson is doing well on the SweetPro he has eaten. He tries to sift through it because he doesn’t like the taste. But he has been eating some, and his hooves and coat look amazing!

June 30, 2014: Danson is doing very well! There was a show yesterday that didn’t go too well in all the classes, but I won Western pleasure and English equitation. I am leaving for vacation in Nebraska, and I will miss the horses a lot! Since we have extra SweetPro feed, we have started my dad’s horse, Nickel, on it. He loves eating it. The horses are in great health, and we are very lucky.

July 26, 2014: The first day we show horses at fair starts tomorrow! I’m really excited! We show ranch horse and showmanship tomorrow. I will also be showing Western, English, and speed. We have to wash the horses and ride today. Danson has been doing great on SweetPro!

August 2, 2014: Fair for Danson and me has been going great! I got all firsts on Western day with him. He was so good for me at fair, and I am so proud of what we have accomplished. In our showmanship class we also got a first. Agape supplements have been great the entire season!

August 8, 2014: Fair was amazing! I got grand champion Western, grand champion English, grand champion ranch horse, first in showmanship and first in goat tying! I had such a fun time with Danson! Agape has worked so well for my horse! One challenge I had at fair was Danson getting really dirty in the morning so I had to spot clean him, but other that that fair went really smoothly, and I had a great time!